I’ve mentioned before how much – as a new parent and non-cook – I liked Annabel Karmel’s recipe book, 100 Best Baby Purees. I’m not sure I realized it at the time I bought it, but the bowl and masher set I bought when Astrid started solids is also from Karmel’s line. Nice work, Annabel!

It might seem silly to buy a bowl – which you probably already have – and a masher – which you think you already have, aka a fork – but I have to say, I used the bowl/masher instead all the time before we moved on to table food. 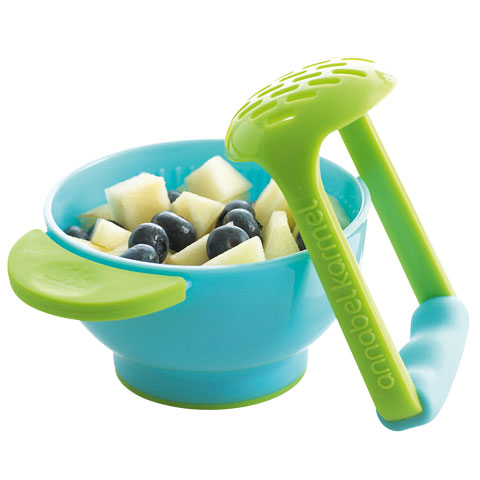 Here’s why: mashing a banana or avocado or sweet potato against the side of a bowl with a fork is a pain in the ass. The fork isn’t the same angle as the side of the bowl, the banana might not be super soft (which is how I like them), and so on and so on. Maybe I’m just inept or weirdly particular, but the inefficiency annoyed me. The Karmel set’s masher fits the bowl’s bottom exactly and the grooves in the bowl itself help you along. Voila! Mushed up baby food in seconds. Plus, you can serve your little prince his newly-mashed up dinner in the bowl: it’s plastic and has a grippy bottom and travels just fine.

(The bowl, with it’s handy friction-y grooves, is still in rotation as Astrid, now two, sorts out her food-to-mouth skills.)

It’s gotten a little hard to find the set online, but at last check, you can pick it up at Giggle or buy the cookbook, the bowl and masher and a few food storage containers from WalMart for the price of the bowl and cookbook alone.