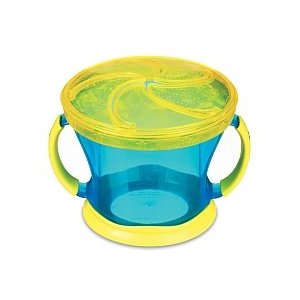 A mom came up to me in Seesaw this morning and asked about Astrid’s snack cup. She was trailing after her one year old carrying the little girl’s snacks in a cute but screw-close Oxo snack container. Open-top, non-self-serve is not the way to go with a grazing toddler. We have 3 or 4 Munchkin Snack Catchers in rotation in the car and the house, three with goldfish, one with the fruit puffs that every couple weeks Astrid decides she loves only to reject them again a day later.

The Munchkins are simple and work well keeping the snacks in – unless Junior Rocker shakes the cup violently. Yes, then the pulverized goldfish will fly out in little crushed bits. But it’s still better than all of them flying out all the time. It’s the best solution I’ve found so far.

(The smaller, lighter alternative, Made for Moms Snack Trap, in my opinion is less sturdy and the lid fits less well, but give it a shot if you prefer the smaller profile.)

Munchkin Snack Catcher, $5.50 for two on Amazon, $3.99 for one on Diapers.com, $8.99 for four at Target or available in the kids’ section of Target, Safeway or your drugstore if you’d like to see it up close