I was pretty concerned about Astrid’s transition to solids. First of all, I wasn’t a cook. I’m a big cold cereal girl. Providing balanced nutrition – and in the form of purees no less – was daunting. Also, I figured I was on the hook for introducing her to a range of foods (most of which I’d never cooked), so she could establish a broad palette and not end up hating mushrooms or being the kid who will only eat crustless pizza. No pressure. And finally, Astrid turned six months old while we were in escrow on our house, so I was managing a move right about the time I was also supposed to be changing all our routines to get some solids into her.

Here’s my two cents, from the other side of the transition: it’s not that big a deal. Really.

The general guideline is to start babies on solids at about six months old.

That said, if you’re a month or two late, that’s fine. Also, if you want to kick things off earlier (or your pediatrician recommends it), in 2010 the American Academy of Pediatrics OK’d starting at four months old. Don’t stress about making this decision: a little earlier or a little later won’t make a big difference as long as Baby is eating well. Just pick a week when you’re not traveling or moving or varnishing your canoe or whatever, and have at it.

What you’re shooting for

Don’t freak out. You won’t be making three special baby meals and measuring nutritional content on Day 1. You’re going to work up to three meals a day gradually, so on Day 1, you’ll be trying a  single “meal” which will probably consist of one ingredient. Once little Guillermina masters that, you’ll introduce some multi-ingredient foods (still purees) and bump up to “eating” twice a day at eight or nine months (soft foods and finger foods). By the time she’s a year old, she’ll be eating table food on an adult schedule (albeit cut up into small pieces).

If Baby is still breastfeeding (or drinking formula) at a year, that fine: you’ll just balance food intake vs. milk accordingly. But you still need to get her on solids so, you know, she learns to chew.

What foods to start with

In the US, the recommendation you read and hear everywhere is infant rice cereal mixed with formula or breast milk. The up sides are that it’s mild so most babies tolerate it well, and that it’s filling which means it might make for better overnight sleep. The down sides are that it tastes like pulverized cardboard and, since it’s heavy, it can be constipating (which leads to another whole set of problems and solutions).

I followed that recommendation, mostly because I would have tried nearly anything to get Astrid to sleep longer at night, but the experiment lasted about two days. She was having none of the pulverized cardboard thing, and I could see her point, so we moved on to steamed and mashed sweet potatoes and we were off to the races. Mashed up avocado is another great starter food.

Starting with mashed veggies has the added benefit of instilling an interest in healthy whole foods early rather than trying to introduce them after carbohydrates, which made a lot of sense to me. (It’s also what they do in Europe, so you can consider yourself sophisticated and worldly.) I know this won’t be true of every child, but vegetables are still Astrid’s preferred food and I attribute it to her first foods experience. 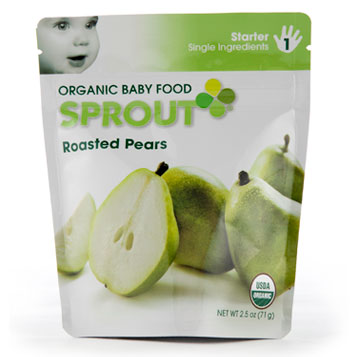 The choice between bought vs. homemade baby food is not a big deal these days. Yes, as with everything baby-related, there are militant moms who would never feed their child anything not grown organically at a local farm where they know all the goats’ names. They cook and jar and can their own baby food and  follow books like Super Baby Food to the letter, watching the nutritional content of every meal like a hawk. That’s awesome and you should definitely join them – if it will make you relaxed and calm and a happy parent.

If you don’t have that kind of time or zeal, skip it. Your baby will be fine. In my view – and this is where I come down on pretty much everything baby-related  – healthy and easy moderation is the best path for you and your baby. Save your fanaticism for the things you love to do. That joy will be a great example and environment for your child. If this isn’t your area of interest however, stressing yourself out to follow someone else’s rigid guidelines will just make you and everyone around you tired and crabby.

There are lots of healthy jarred baby foods on the market. They’re labeled by age, so you don’t have to worry about mashing to the right consistency or introducing a potentially allergy-inducing ingredient. If you are super concerned about Baby eating all-organic, there are lots of options there too: Earth’s Best, Plum Organics and Sprout are just a few of the many choices.

If you’re at all on the fence between jarred and homemade, I’d suggest giving the cooking a shot, at least early on. It’s ridiculously simple – and that’s coming from someone who didn’t cook really at all – and you’ll save some money. What you’re looking at isn’t Julia Child: it’s one mashed up avocado half once a day. If you have a steamer basket in your kitchen and one sweet potato, you’re looking at two minutes of prep (peel it, cut it up into cubes) and ten minutes of waiting while it steams. Oh – plus 30 seconds of smushing it up. No seasoning, no such thing as overcooking. Failure is pretty much not an option. And if it all get’s to be too much after that short experiment, it’s fine: you can always cut over to jarred food later.

I was bejesus scared that Astrid would have a food allergy that I would find out about because she went into anaphylactic shock while I was home alone 0r, worse, asleep at night. Since Ramon and I have no food allergies, this was probably a little bit of an edge case, but we all have our paranoias, right? According to BabyCenter, only about 6% of young children have food allergies and 90% of them are to milk, eggs, nuts (peanuts or other), soybeans, wheat, fish or shellfish.

It seems like allergies in children are everywhere, and, as a result, recommendations tightened about what foods to introduce to kids early. However, research indicates that waiting to introduce the most common allergy foods until later hasn’t decreased the number of kids who are allergic, so the AAP has backed off again. I’ll leave it to you and your pediatrician to have the specific conversation that will calm your fears and lay out a comfortable process for you to follow, but these are the highlights:

Keep in mind that allergic reactions happen quickly. (I discussed this with an EMT because I was afraid Astrid would have an egg for lunch and then not manifest symptoms until that night when I might not hear her on the monitor.) If your baby is allergic, you’ll see it pretty much right away. (More mild, delayed symptoms, I’ve been told, like a slight rash around the mouth, are a sign of intolerance, not allergy. Talk to your doctor. What ours told us is that the intolerance can pass and you can try that food again in a few weeks.)
For more details, Baby Center has a section on specific food safety questions.

My usual disclaimers apply here: I’m not a pediatrician or a doctor or an accredited expert of any kind. These recommendations are based on my personal experience, lots of conversations with other moms and the advice I’ve gotten from doctors and experts. If you are in doubt about any of these notes or subjects, ask your doctor.