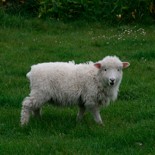 A bouncer is a must. You need to have one. Really. Yes, baby can lounge in a cat bed or on a posh pillow, but there’s no substitute for giving her a good angle on what’s up in the room and the ability to bounce herself a bit. She wants to see what you’re doing and who can blame her?

You’ll be picking up your bouncer to set it on the bathroom floor while you shower, or on the kitchen floor while you cook, or on the dining room table while you do the bills, which means you’ll need one that is lightweight and easy to move around. (Unless, of course, you live in a tiny, open-plan home that has a transparent walk-in shower – then, yes, get one of the giant bouncers that’s hard to move because little Tanya will indeed be able to see you everywhere you go. Also: I’d think about moving. Soon. ‘Cause that place you live in is weird.)

There are a lot of bouncer options out there. Most play music, vibrate, and have a “bridge” with toys of varying intensities hanging off it for baby’s batting pleasure. (Don’t use the bridge as a handle to pick the bouncer up with baby in it. Trust me: they come off. That said, you really do want the bridge to be removable in case it doesn’t work for Junior and he’d rather just look around.) As a minimalist mama, I don’t think new babies should be swamped with lots of lights, electronics, whizzing things and massive doses of color. As a minimalist person, I don’t think my living room wants that either. The bouncer market begs to differ.

It was ridiculously hard to find a basic, safe, lightweight bouncer in a nice color scheme. And when I found the one I wanted, it was discontinued. (I won’t get into the gory details, but this became a mission that ended up including ebay, Los Angeles and the nice surprise of discovering that you can order inexpensive replacement parts for pretty much anything Mattel – or any of their sub-brands – makes. So keep that in mind when pieces snap off your toys!)

Anyway, my recommendation is to get one of the super basic ones and save the special features for your baby swing (in which your baby will likely be more comfortable anyway).

If you have a ton of room or the budget to get a second lightweight one to move around the house, sure, go for it and get the Mercedes model: Peg Perego makes one with surround sound, a canopy, and a seat with adjustable angles. Also: tasteful colors. But you’ll pay $170 for it, so there’s that.

Along similar but much more annoying-sounding lines – although it does have cool-looking stripes – is the Magic Astro Bouncer, which costs $199 but requires all sorts of secondary purchases to get the kick pad and all the features working. My advice: avoid.

And Baby Bjorn, coming in at $149, makes a sleek, no frills, fold-able model that I like a lot and would have gotten if I’d been able to stomach the price tag for something we used for less than a year. 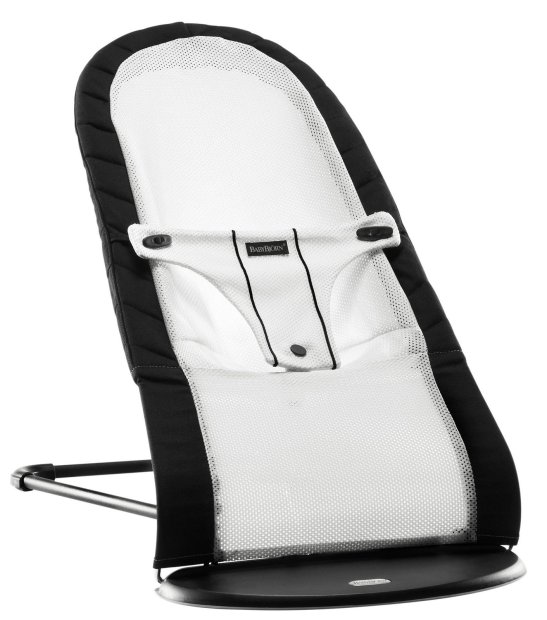 If you’re space- and/or budget-restricted, the Combi Bouncer, in bee or ladybug design, is similar to the one we have: lightweight, small profile (for fitting in a bathroom!), an iPod attachment, and no big electronic toys. (Some of the reviewers have noted that absence as a bad thing. I handed Astrid a bunch of things to play with + attached a few toys and balls to the side of her no-frills model with rings and it worked just fine. Also, I wasn’t looking for her to entertain herself for more than 5-10 minutes anyway: she wasn’t keen on being left on her own as an infant, and I wasn’t keen on substituting blinking lights for actual interaction, so we were on the same page.)

Down side with the Combi: you can’t remove the cover for washing. Ours doesn’t come off either and it wasn’t a problem since Astrid wasn’t particularly accident prone, but it’s something to consider.

Bright Starts makes some inexpensive bouncers ($25-$50) in subtle colors, but I found their footprint to be too big – they’re just very wide. And Fisher-Price, of course, has their offerings ($27 and up), some quite light and small profile, but God: those patterns… (I am still a fan of their Zen line, but the Infant Seat isn’t truly a bouncer + it’s just too big. If you love the aesthetic of that line, just spring for the swing.)

Good luck! And don’t stress too much about this purchase: a bouncer is really nice to have but if tiny Lyle doesn’t like the one you get him, you can always trade off on Craigslist – or just wait a few months and he’ll be crawling!!